How Do Mice Escape Mouse Traps? 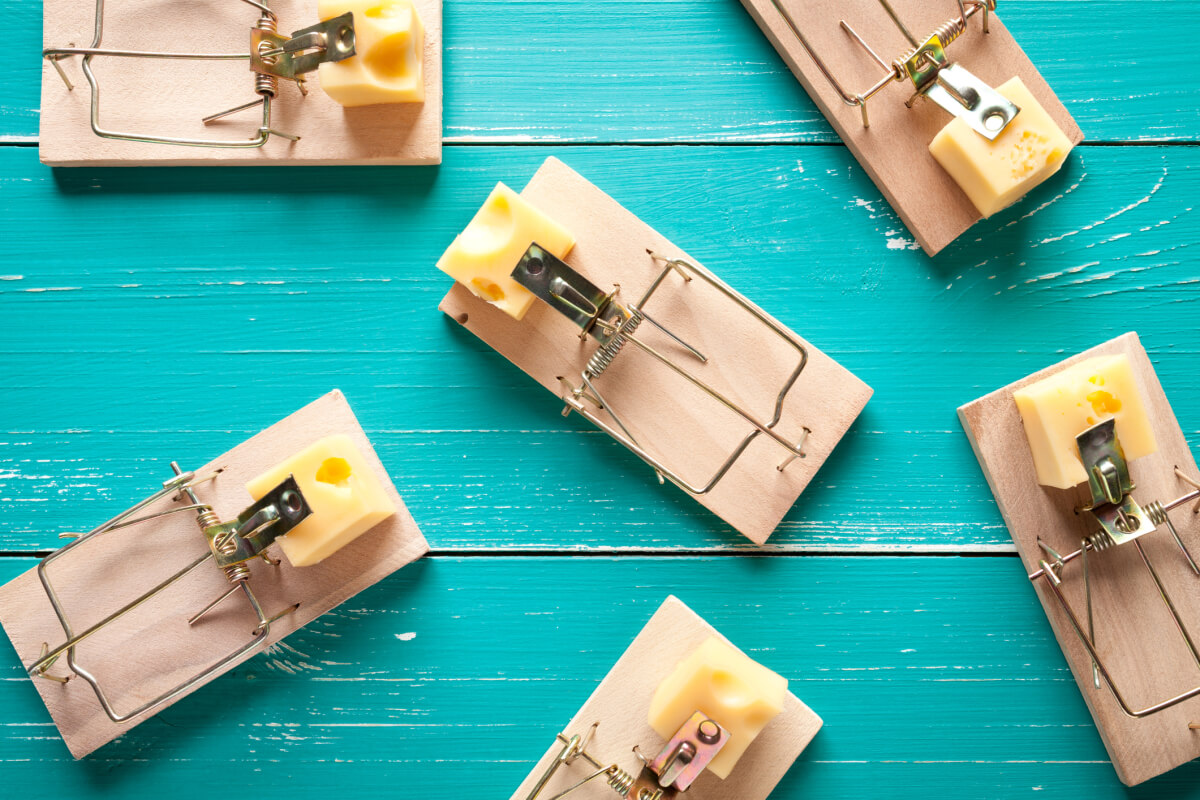 There’s no mouse trap that works 100% of the time. Waking up in the morning to see no dead mice in the trap can be disappointing. There are several reasons that this might happen. One of the most plausible reasons is that the mouse was able to escape and avoid the trap.

So how do mice escape from traps? Mice have evolved to have quick reflexes that can help them avoid the snap of the mouse trap. If they do get caught, they’re able to gnaw off their limbs just to survive. They can also become conditioned to avoid traps altogether. Besides a mouse's innate abilities, other reasons why mice can escape are user errors or mouse trap malfunctions.

Mice have developed a set of instincts that not only help them get out of traps but narrowly escape them too.

Mice are included as what's known as a prey species. They're so used to being hunted down that it means that they're always on high alert of any possible predator or attempts at their life. They use a variety of senses that help them avoid danger, specifically their sense of smell and sight. A study found that even just a large shadow looming overhead is enough to get mice scurrying out of the way and escape any type of trap.

The mice who have managed to narrowly escape death will have passed down their survival instincts onto their offspring. This is why there are now generations of mice that are now more adept at avoiding and escaping mouse traps.

All animals have innate survival instincts that help them in life-or-death situations, such as getting caught in a trap. It's common for one of these instincts to be to chew and gnaw their caught limbs off. Trappers have called this "wringing off".

Captive mice in no-kill traps like glue traps are faced with two options: attempt escape or risk dying of starvation or thirst. Getting caught in mouse traps is a highly stressful situation for mice to be in.. Once a mouse’s survival instinct kicks in, they’ll attempt to be free of the trap, at whatever cost, including mutilating their limbs or tail to escape.

A study was performed about how spiny mice evade the claws and capture of barn owls, one of their natural predators. Mice -- or any prey animal species -- by nature have three responses to potential threats that can fall into either one of 3 categories: freezing, fleeing, fighting. When there’s a moving predator, prey tend to freeze to draw attention away from themselves. For times when there’s little option to run or hide, the prey would fight the predator to save itself. But if there was a way out, they would often choose to flee, much like what was observed in the study.

The study found that, while running away from the swooping attack of the barn owl, the mouse would switch directions at the very last moment. The owl, well into the attack movement, would miss the mouse and land on the ground, having to fly back up and reset itself. The mouse would take this time to scurry into a hole for safety.

This instinctually small reaction time is one of the ways that enables mice to avoid getting caught in powerful snap traps.

Conditioning is a way for animals to learn or unlearn certain behavior depending on the rewards or punishment that they begin to associate with the actions. The most notable conditioning experiment was done by the Russian physiologist Ivan Pavlov. His experiments involved ringing a bell and then giving treats to dogs. After some time, the dogs would associate the bell with food. So when Pavlov rang the bell, the dogs would naturally expect food and begin salivating -- even without any food being given. This type of conditioning can happen with mice as well.

Although a study found that conditioning in mice may vary in training duration, it’s still achievable. It may potentially be linked to why mice who have previously escaped a trap know how to avoid rodent bait the second time.

It's possible that the mouse trap could’ve experienced a malfunction. One problem could be the sensitivity of the catch or the trigger where you place the bait. Some types of traps, such as a larger trap, tend to have less sensitive catches (normally because it's designed to be triggered by larger sized animals). Less sensitive catches mean that mice can eat the bait without worrying about getting snapped.

Alternatively, it's possible for the catch to be too sensitive, causing a misfire and snapping prematurely even without any signs of rodent activity.

1) The placing of the mouse trap

Another common reason why mice might survive a trap is that there may have been user errors. Placing a trap in the middle of an open area decreases the chances of mice getting caught. Instead, it's recommended to place the trap with the bait side touching the wall. This is again due to evolutionary reasons with the mice.

Since mice are small, predators can easily catch them. When they're out in the open, they’re vulnerable from all sides. But when they hug the wall, they only need to be concerned with one area where an attack may come from. This is why it's best to put a mouse trap against the wall.

Mice also tend to follow the same path when they go out. So placing a mouse trap on their path increases the chances of catching them.

2) Mishandling of the mouse trap

Thus it's recommended to use a pair of gloves -- even disposable gloves will do -- while handling the mouse trap.

3) Using the wrong kind of bait

Some baits are much better than others. While cartoons have pushed the idea that mice love cheese, that isn't actually the best bait to use. One reason is that it's much too easy for mice to swipe and steal, making it easy for mice to escape the snap of the trap.

Instead, it's recommended to use peanut butter or Nutella. These give a strong odor that attracts mice. Because of the texture and form of this type of bait, it forces mice to stay and lick. Some trappers even put small pieces of cotton balls with the bait. These cotton balls get stuck in the mouse's teeth, making it more difficult for the mouse to eat. The longer they interact with the bait, the more likely that they'll trigger the snap.

How to Prevent Mice From Escaping Traps

To further prevent mice from escaping from your traps, here are a few more tips that may help you.

1) Ensure Your Trap Is In Good Condition

Checking the catch. When you're setting up the mouse trap, ensure that the catch or where you put the bait on the trap is working properly. To test out its sensitivity, you can trigger it by poking it with a straw, pencil, or even a piece of cardboard. This will also help you to check on the strength of its snap and tension of the spring: if the mouse trap lifts off from the ground when you trigger it, that means that it's got a powerful snap.

Cleaning the trap. When a mouse spots a dead rodent on the trap, it will tend to urinate on the trap. This will tell other mice in the vicinity to stay away from it. Since urine and other fluids tend to seep into and linger on wooden traps more, it's important to thoroughly clean the trap after use.

Wash and rinse the mouse trap with warm water. Use a cotton swab to clean between and inside the coils of the spring and to generally get all areas of the urine soaked, blood covered trap.

As a safety tip prior to cleaning the trap, use heavy gloves while removing the dead rodent caught in the trap. Mice carry multiple deadly viruses such as Hantavirus that can spread to humans and be highly dangerous to children.

Mice tend to learn and adapt to the traps in their way, making it easier and easier for them to avoid it altogether. This is why it's advisable to set multiple traps around the home. When placing a trap against the wall, try putting two side by side. This way, when a mouse tries to jump over a trap to avoid it, it may land on the second one.

You can also use different types of traps as well, such even no-kill traps like glue traps or a trap bucket. If you're using a no-kill trap, keep in mind that relocated mice can find their way back to their nest even if they’re a quarter of a mile away from it. It's also important to note that relocating mice is illegal in some states, and can affect the local wildlife.

When to Call a Professional

If your food sources are easily accessible by mice, it will encourage them to settle down and grow in numbers. Rodent population tends to grow alarmingly fast if you aren't careful. Mice can reproduce at an incredibly fast rate; for instance, female mice can produce about 32 to 56 pups every year.

If rodent control has become more of a hassle and you really want to get rid of mice in your area, consider reaching out to professional pest control services like Yale Pest Control.

Established as a modest family-owned pest management company in 1983, we've grown to become one of the leaders in the pest control industry. Our core belief is to offer the highest quality of service attainable at the most reasonable prices.

Our team of pest control professionals conduct thorough assessments of your living space or business, and use integrated pest management (IPM) practices in all of our operations to provide you with a wide variety of fast and effective pest control solutions.We specialize not only in rodent infestations but for insects and wildlife as well. Visit our website to know more about our services or contact us today.