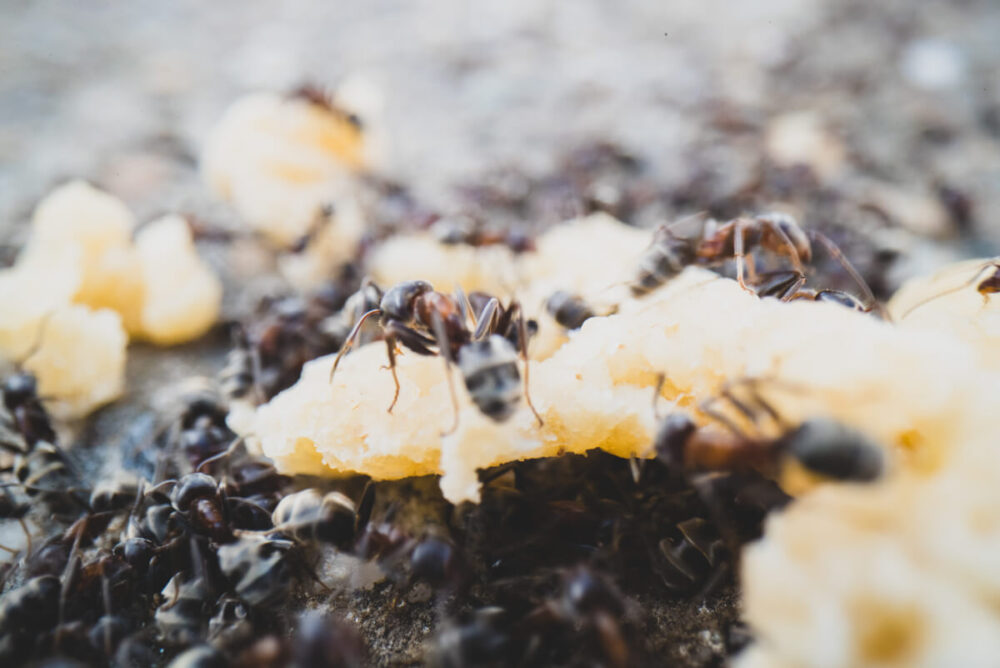 If you spend enough time observing ant activity in your house, you’ll familiarize yourself with a lot of their behaviors. Ants are social insects that hunt food sources for their entire colony. Some ant colonies have mounds, while some create their shelter from tree branches, tree stumps, and other wooden structures. However, one of the mysteries that some homeowners discover is that some ants, specifically carpenter ants, bury their food as well as their ant bait.

So why do carpenter ants and any other species of ants cover their food with soil? Female worker ants would bury their food items if it's too large and can't be carried easily on their backs to be transported to the carpenter ant nest. Ants will first break the food into smaller pieces to bring it to their colony. Unfortunately for some homeowners, ants will also do this to their baits.

Why Carpenter Ants Bury Their Food

The black carpenter ants are one of the most invasive pests that can cost millions of dollars to repair, as they can ruin the structural integrity of wooden structures. They shouldn't be mistaken with winged termites who eat wood - these ants create galleries in wood for nesting their satellite colony.

Female worker carpenter ants are 3/8 to 1/2 inches long, though you might find some of them only 3/16 inches long. The ant queen may be as long as an inch, and like male ants, they also have wings. However, they’ll eventually lose their wings once they start their nest. Carpenter ants have a round thorax and slightly-bent antennae.

You may have noticed that some ants bury their food. A black carpenter ant tends to cover their loot in their search of food when it's too large for them to carry on their backs and transport it to either their parent colony or their indoor nests.

Because of this, you might see dead insects, large pet food, and other food that might be bigger than them. Burying it will help them break it into smaller pieces that they can carry and deliver to their nests.

This behavior among ants is one of the reasons why you might find your ant bait with dirt--you may have used bigger baits for ant control. While this doesn't really affect its effectiveness and may sometimes even make it faster and more successful, it does leave a mess that can pose risks to your home.

Other Ant Species That Bury Food

If you're set on addressing this behavior in ants and ant infestation in general, you might want to be sure if you're really up against a carpenter ant colony. Other kinds of ants also bury large food, so it's important to identify the ant species you have in your home.

Another type of ant that also buries their food is the red imported fire ant. These foraging ants are easier to identify than carpenter ants because of their reddish-brown bodies and stingers. They’re about 1/16 to 1/5 inches long with 10-segmented antennae and a 2-segmented club. Their petiole has 2 nodes, 3 teeth on the front of their heads with large eyes and no spines on their thorax.

If you find RIFA in your yard, it's better not to approach them as they get agitated easily. More than this, they can also get pretty aggressive and may sting repeatedly.

Risks from Ants That Bury Food

Carpenter ant infestation may ruin even sound wood in your home. They may create galleries in hollow spaces, such as your wall void or anywhere there's damp wood. They may multiply a single active colony into multiple outdoor nests or satellite nests.

You may also find your bait formulations among one of the loots these ants have buried. This shouldn't be a big problem as far as effectiveness in ant control is concerned because this might even help speed up the baiting and poisoning problem. However, these may also pose risks.

Ants dump bait and the food they’ll transport to their colony in the soil and bury it. Since they are pretty invasive as they search for food, they might crawl on different surfaces in your home. One place that always contains their food preferences in your kitchen, which also contains your own food.

Ants that have come into contact with your bait and eventually have crawled on your supply of food might have contaminated it. Some ant baits don't kick in that easily for all the right reasons, so they might have time to take a trip to your kitchen after burying your bait.

Having your food contaminated with bait wouldn't cause many adverse effects on you, since it's only designed for insects with little potency for humans. However, you must not take it lightly as well, which brings us to the next point.

Food contamination isn't the only problem you'll be facing, but also bacteria infection. Aside from coming into contact with soil and bait, ants also crawl in different nooks and crannies. Having them crawling on your supply of food and kitchen counters may introduce different types of disease-causing bacteria in your household.

As long as the ant bait does its job in wiping out the entire ant colony, it might not be a problem that they bury the formula. However, some homeowners find the mess they create a nuisance. Some are also worried that their pets may accidentally ingest the ant bait. We know that our pets have a strong sense of smell and are often up for an adventure in our yard, especially dogs.

Many dogs have a habit of sniffing and digging in the yard. Ant baits are designed to be appealing to ants, so they may taste and smell like sweet foods. Your pets might also be lured in by the smell of the bait. While most ant baits today are safe with pets and kids, it's best to avoid accidents.

How to Prevent Ants from Covering Your Bait

With ant baits, the primary goal is for them to deliver the formula and share it among their colony. It might be difficult to stop the ants from burying the bait if that's their process for transporting it to their nest.

However, you may consider other options to stop ants from needing to cover the bait first with soil. These steps may help you minimize mess in your home and reduce the risks.

Carpenter ants cover their food with soil because it's too big for them to carry back to their colony. If you don't want them burying their bait, opt for a smaller one, which will be easier to carry to their nest. You may choose liquid ant baits and granules, but be sure to spread them evenly in your house for the ants to smell them quickly.

As established, using liquid ant baits may help prevent ants from burying it. Cleaning will also be much easier because ants will leave a few crumbs. Liquid ant baits are also more recommended because of their slow-acting effect in eliminating ants.

Keep your home clean by clearing food particles in your kitchen and investing in reliable food storage containers. Aside from this, it's also recommended to vacuum it regularly to reduce debris, hair, and other particles ants may use for nesting.

Clear the area surrounding their colonies as well, so they wouldn't have access to nesting materials that will cover up their food and bait.

The moisture content in your home is also a factor you need to consider if you want to eradicate ant infestation. Carpenter ants are attracted to damp wood, such as tree trunks, landscape timbers, and even decayed wood.

It’s good to note that moisture and wood also aren't a good combination, so check your home for water leaks that may attract nesting.

If your ant bait is too far from their hill, ants bury their food first. Avoid this by placing baits near their nests, so they’re less likely to cover the bait with soil. While they might still use soil to break it down, they wouldn't create too much mess because it's already near their colony.

Ensure that you replace the ant bait regularly as they might age and soon be less appealing to ants the longer they are buried. Inspect your ant bait once in a while to check out its effectiveness. Once you've noticed the station collecting dirt, it's best to replace it to avoid getting buried completely.

Some ant baits are likely to get buried by ants due to how they're manufactured. If you're facing a carpenter ant infestation, veer away from large, solid bait. Check out ant baits, such as Advance 375A Ant Bait, Advion Ant Bait Gel, and AMDRO Ant Granules.

The Advance 375A Ant Bait comes in granules, so carpenter ants will easily carry them on their backs. It contains abamectin that attacks the nervous system of ants directly and paralyzes them while still promising a slow-acting effect.

Not only do carpenter ants find this appealing because of its protein-based ingredients, but also pavement ants, fire ants, and odorous ants. It's also ideal for ants with outdoor nests because they’re not harsh on shrubs and plants.

The Advion Ant Bait Gel might be more recommended for you if you're up against ant species that love sugary foods. This has Indoxacarb as its active ingredient, which offers delayed effects.

It's sure to eliminate ants after a few days of coming into contact with it because it'll keep the ants alive enough to distribute the bait among their colony. Ants will also find this easy to carry because it comes in gel form.

The Amdro Ant Granules is also an effective treatment for ants in your yard or lawn. This outdoor pest treatment can eradicate at least 17 kinds of ants and guarantee its action in lawns, ornamental gardens, and other areas outdoors. Because of this, it's one of the most recommended baits during seasons when ants are the most active.

Other Pest Control Products for Ants

Aside from ant baits, you also have other options for eradicating carpenter ants and others of their kind in your home. You may opt for a non-repellent spray, which will be impossible for them to cover in soil, or home remedies for deterrent.

Non-repellent sprays or perimeter treatments are also recommended for addressing ant infestation in your home. Spray this along surfaces where there are ant trails. As ants wouldn't be able to sense the formula, they would crawl on the treated area, and the poison would stick to their bodies. They’ll then spread this poison when they return to their colony.

Home remedies may be your first line of defense against ant infestation, but homeowners shouldn't rely on them solely. They may cover up ant pheromones, which show every ant their trail using soapy water, vinegar and water mixture, or essential oil and water mixture.

They may also try sprinkling up spices, such as cinnamon, paprika, or pepper in corners where ants may crawl. Placing boric acid mixtures as ant bait is also one of the tried-and-tested home remedies.

Eliminate Ants and Other Pests with Yale Pest Control

Ants are quick to multiply, which is why getting rid of them proves to be too challenging for homeowners. Failed ant control strategies might cause ant infestation in your home to worsen, so it’s best to seek a pest management professional, such as Yale Pest Control. We have integrated pest control solutions for a wide range of infestations.

Get in touch with us for a free quote today.